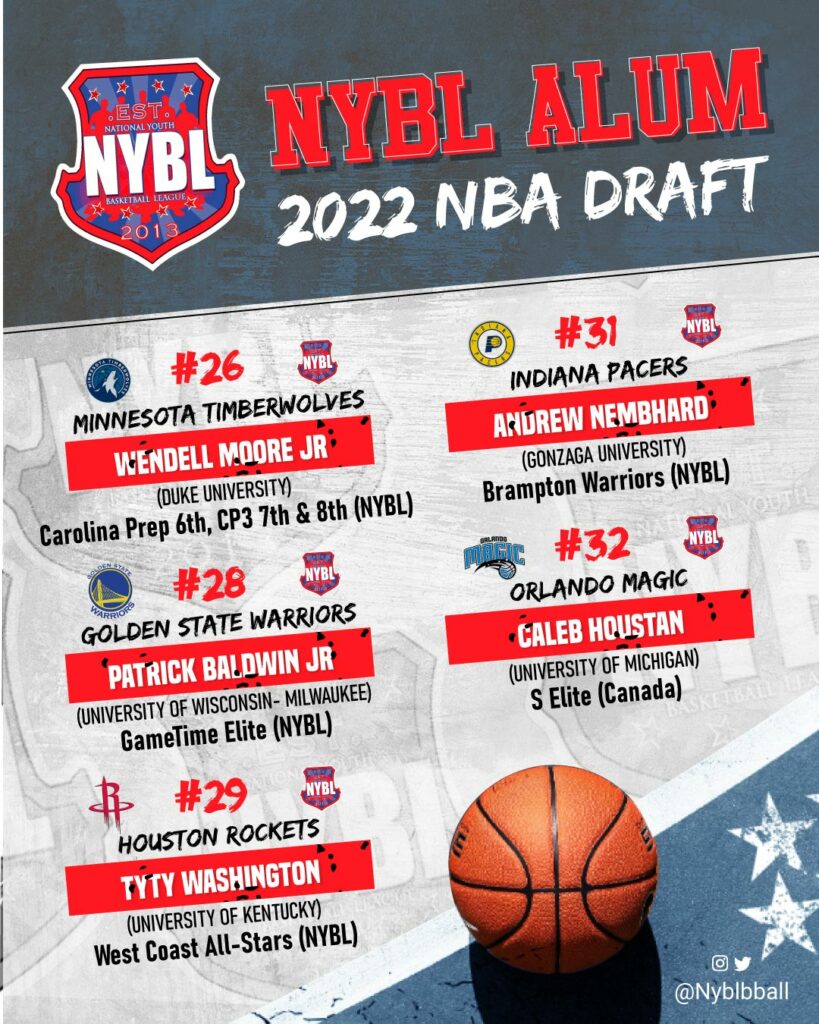 The National Youth Basketball League (NYBL) has had the pleasure of watching many great basketball careers get started in our tournaments over the past 10 years. Time and time again, we have watched young prospects blossom into households names across the country. Often times, the hype and recognition garnered at our NYBL tournaments seem to grow legs, and before you know it, these hidden gems are no longer under the radar.

With alumni such as, Scottie Barnes (2022 Rookie of the Year), RJ Barrett, Anthony Edwards, and Tyrese Maxey, it’s clear to see the level of competition teams are liable to face any given game. Last night the 2022 NBA Draft took place at the Barclays Center in Brooklyn, New York – Lets take a look at the latest NYBL Alum’s to hear their name called to join the National Basketball Association.

With the #28 pick in the first round of the NBA Draft the Golden State Warriors selected Patrick Baldwin Jr of the University of Wisconsin- Milwaukee. Baldwin Jr was one of the NYBL’s most elite players with GameTime Elite over the course of his middle school career.

With the #29 pick in the first round of the NBA Draft the Houston Rockets selected TyTy Washington out of the University of Kentucky. TyTy, despite being really small, put up big numbers and led his West Coast All-Stars team to multiple NYBL Championships.

With the #31 pick in the second round of the NBA Draft the Indiana Pacers selected Andrew Nembhard out of Gonzaga University. Nembhard teamed up with RJ Barrett on the Brampton Warriors team to form one of the deadliest duo’s in NYBL history.

With the #32 pick in the second round of the NBA Draft the Orlando Magic selected Caleb Houston out of University of Michigan. Caleb was a dark horse in the NYBL as both of his years with S – Elite (Canada) he played up an age group. You could tell he was destined for greatness by his work ethic and the chip he played with.